Contract brewing is a popular and accessible way for many New Zealand breweries to get their beer to a wider audience. Could more UK producers follow suit? James Beeson finds out. 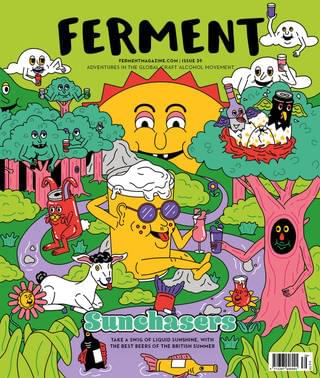 This article is from

For a country with a relatively small population, New Zealand has it pretty good as far as beer is concerned. According to a recent report from the Brewers Association, the country has more breweries per capita than the US, UK or Australia.

One of the best things about the country’s beer scene is the selection in its supermarkets. Such is the scale and spread of good beer around the country – walk into any Countdown, Foursquare or New World and you’ll doubtless find a healthy selection of vibrant and colourful cans and bottles from some of the country’s finest brewers – you’d be forgiven for thinking that most New Zealand breweries must be pretty sizeable.

However, if you make the trip to go and visit one of them, you’ll likely be left scratching your head and wondering if there is some sort of Tardis-like wizardry taking place inside their fermenters. After all, how else could these tiny producers be making enough beer to service every supermarket from Auckland to Invercargill?

The answer, of course, lies in contract brewing. By outsourcing the production of core range beers to specialist facilities, or other breweries with spare capacity, craft brewers are able to hit the sheer volumes of beer required to meet supermarket contracts, and focus on brewing limited releases and experimental beers in-house.

One of the reasons for the initial popularity of contract brewing in New Zealand was the relative cost of importing stainless steel to a country far away from the rest of the world, according to freelance beer writer and editor Michael Donaldson.

“Certainly in the early days to import a brewery system from the United States and Germany would have been hideously expensive, and people just couldn’t afford it,” he says. “With the relatively low volumes involved in New Zealand as well, it would be a huge investment in stainless steel, especially if you were just wanting to dip your toe in the water.”

“All the early pioneers in New Zealand were using repurposed dairy equipment because the cost of an actual physical brewery was so high. The big breweries had cleared the landscape and there wasn’t any of the infrastructure to make that kind of equipment here.”

In the last 10-15 years, equipment costs have fallen thanks in part to the availability of cheaper Chinese brewing systems, but the contract model has still persisted. Donaldson estimates there are currently around 30 contract-only breweries (that don’t own any stainless steel of their own) in New Zealand, as well as a whole host of others such as Fortune Favours, Garage Project and Fork Brew Corp all outsourcing to varying extents in order grow their brand without having to invest in expensive new equipment and hire additional brewing staff.

The contract model can also be hugely beneficial to larger producers looking to utilise spare capacity. Deep Creek Brewing Co, on Auckland’s north shore, brews beers for a number of other breweries, including contract-only brand Behemoth Brewing Company. Deep Creek co-owner and sales and marketing manager Scott Taylor says that the possibility of contract brewing was a key factor when deciding how large to build its new brewery.

“I think it is a personal thing for every brewery to decide, but there are definite benefits to doing it,” he says. “You can generate funds by using your spare space and there’s no point having stainless steel that is just sitting there when you could have someone else helping to pay it off.”

Indeed, the contract model is so lucrative that production facilities that used to specialise in wine are now converting to beer. In 2017, B-Studio, a contract wine-maker from Napier announced plans to build a huge, purpose built brewery. Completed later that year, the site features a highly efficient Krones brewhouse, alongside top of the line bottling and canning lines.

Wellington’s Garage Project was one of B-Studio's cornerstone customers, and the brewery now uses the facility to produce a number of its core-range beers. Co-founder Jos Ruffell states that he didn’t initially intend to use contracting, but that by working with The Hawkes Bay facility, the brewery has been able to invest in more ambitious projects including research and development in yeast and hops.

“It would have been a lot easier for us when we were starting out to have used a contract facility, as a lot of other breweries were doing at the time,” he says. “But instead we chose to spend a great deal of time, effort and care into converting an old garage in Aro Valley to produce beer on a tiny 50l kit because that was how we wanted to approach it and what was important to us.”

However, having grown very quickly in a short space of time, Garage Project soon found that demand for its core beers was restricting what it was able to produce at its small Wellington site. Rather than turn to equity crowdfunding, or sell out to a multinational, the brewery chose to partner with B-Studio, and even helped with the design and construction of the company’s brewery.

“Working with the guys at B-Studio has enabled us to focus on some really exciting stuff like our Wild Workshop, the Hapi Research Project and exporting our beers directly to Australia, which we think ultimately is what our customers are more interested in,” Ruffell adds.

Not everyone agrees, however, that contract brewing is the way forward. There are some in the industry who believe that the arrangement goes against the values of authenticity and transparency that craft beer drinkers cherish, and could lead to a lack of accountability across the supply chain. In 2016, the reputation of Nelson brewery Townshend’s was severely damaged after a brewing and distribution deal with Tuatara went sour, leading to numerous customer complaints and the former bringing back all of its production in-house.

Speaking at the time, brewery owner Martin Townshend stated he felt he had put too much trust in his contract partner, but called for tighter regulations showing where, when and by whom beer was being produced.

“Even though that beer has got my name on it – we didn’t have a single thing to do with it,” he said. “I think contract brewers should be required to show where the product is made, by whom and when.”

To avoid accusations of a lack of transparency, Garage Project labels its beers as either AV (Aro Valley), WW (Wild Workshop) or HB (Hawkes Bay) so that consumers know where the drink in their hand was brewed and packaged, and maintains a regular presence on site at B-Studio to oversee the production of its beers there.

“We are very much there on the ground, checking in with them [BStudio] and making sure everything runs smoothly on brewday,” Ruffell adds. “We try to keep as close a relationship with them as possible. We’re certainly not just dropping off the recipe and picking up the finished product a few weeks later.”

One person who certainly knows a thing or two about contract brewing, both in New Zealand and the UK, is Yeastie Boy’s Stu McKinlay. After starting life as a contract brewer in Invercargill, the brewery has continued to utilise contract brewing since decamping from New Zealand to the UK, producing its beers at BrewDog, West Berkshire and Fourpure Brewing Co in London.

McKinlay is quick to argue the case for contract brewing, and insistent that the lack of physical brewery doesn’t equate to less risk or commitment on the part of his brand.

“It can be useful to supplement your production, which a lot of breweries do, or for your entire business model like ourselves,” he says. “Either way it is so much more than simply passing over a recipe and picking up some beer at the end of the process.

“We have a head brewer - James Kemp - who, in trying to wrangle the breweries we work with, probably has more sleepless nights than most. The real skill in contract brewing is getting a beer that is true to your own brand but with the host brewery’s signature flavour.

“Sometimes people say ‘you’ve not really got any skin in the game’, which really cracks me up,” he continues. “We have three kids and two dogs and 100% of our family income is from Yeastie Boys (my wife, Fritha is our art director). We have no savings, no investments outside the business and no dream home in New Zealand... We’ve got 100% of our skin in the game.”

On the subject of whether the contract brewing model is something more UK breweries could seek to adopt in the future, Mckinlay is optimistic, and hints further expansions into new markets could be on the horizon for his brewery.

“I don’t think there is much holding anyone back from contract brewing in UK besides themselves,” he says. ”In general the consumer is more open to it than we expect... a lot of people care more about the ingredients, the way businesses treat their staff and the quality of the actual beer than who actually owns the stainless steel (which in reality is very often a bank, anyway!).”

“We are certainly interested in contract brewing in other places and, in fact, came very close to pulling the trigger in USA last year. We had an investor and a USA business development manager all lined up. It was just a little too much to bite off at that time.”

Sign up now to start your craft beer adventure!